The potholders for the 2013 swap (on Ravelry, on Flickr) are done!

Pattern: Eight Pointed Flower by Julie Yeager. With the addition of a few more rounds, my potholders came out to be exactly 6″ square.

The back was an improvised pattern, crocheted with improvised colors (similar, but not the same, if I had run out). At first I was slightly bothered that the backs weren’t all the same, but then realized that each potholder will go to a different recipient, so this picture is the only time the three of them will be seen as a group. So, I got over it.

Crochet hook: size C (2.5 mm) from this set, which is still my favorite. 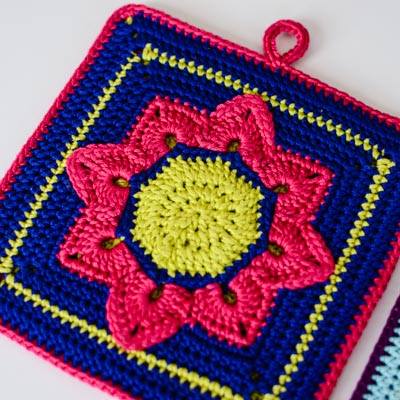 I loved this clever, clever pattern and look forward to exploring other patterns by Julie Yeager for future potholders/blanket squares.