Two relevant comments popped up in response to my last post. The first one noted that by lining up the eyelets on the front and back of the potholder, I was creating a burn hazard – a hot pot handle would be surely felt through. 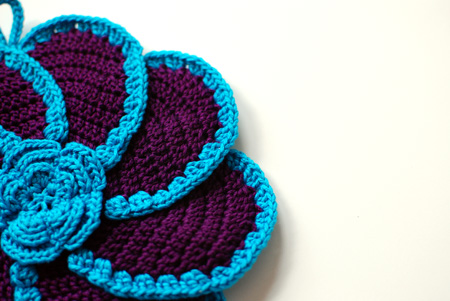 Fortunately, the trim is nice and dense, and completely covers the eyelets, so this is not an issue. Besides, I wonder if anyone actually uses these potholders for cooking? To me they are pretty decorative things to hang on the wall.

The second comment pointed out that the right and wrong side of crochet do not look terribly different. Why couldn’t I just crochet an identical front and back, stack them, and attach them together? The front of one would be the front, and the back of the other would be the back.

I don’t disagree that crochet stitches look fairly similar from the front and the back. However, if it’s not too much more effort, why wouldn’t I take the time to make the front and back identical? If you’ve been reading this blog long enough, you know that I’m not a follower of the “Good Enough” school of thought. Never have been. As they say, your mileage may vary ;).

With that in mind, I finally got to the tedious task of finishing, and created some potholders! 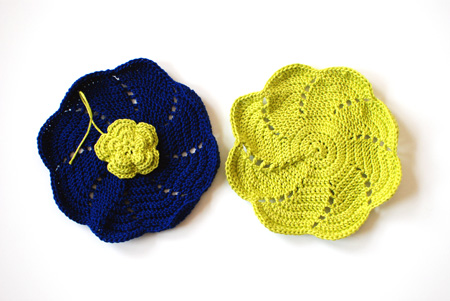 After crocheting the front and back and weaving in their ends, I crocheted the rose. I left a pretty long tail when starting (about 10″), and used this end to sew the rose to the front of the potholder.

Next, I partially crocheted all eight petal swirls, starting each one at the center of the potholder. I didn’t weave in the “starting end” as I went along, and instead used it to tack down the first few petals to the front. This ensured that each swirl stayed down and didn’t flip or stick up.

When I reached the part of the swirl where the front and back sides would be joined, I left a long length of yarn (about 65″) and moved on to the next swirl. This allowed me to start all the swirls easily, with nothing covering the back side of my work. I left the entire ball of yarn dangling off of the last swirl: that one got the hanging loop. 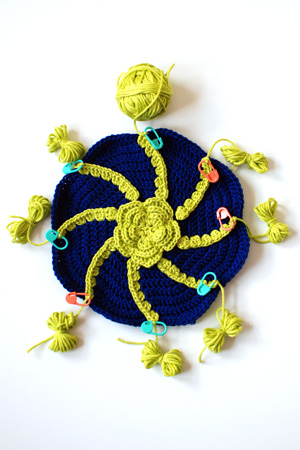 Last, I lined up the back of the potholder, and finished all the swirls. By moving in a counter-clockwise fashion, I was able to tack down the yarn end of each swirl when working the swirl to the left of it. 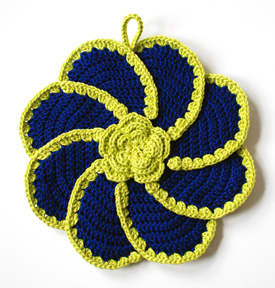 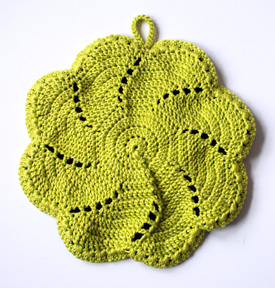 Very simple, and very pretty, I think! I love how each petal is its own little entity with its own bordering swirl – I think it adds a certain dimensionality to the potholder. 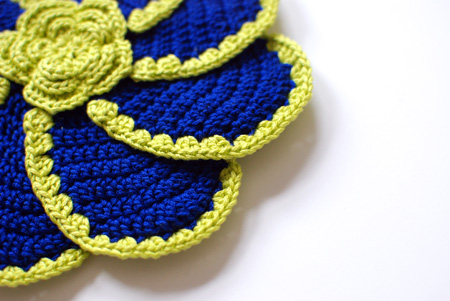 I still have 3 potholders to complete and block (it’s a must: they are so wrinkly right now!), and then they’ll be on their way to Adrian for the swap! The hardest part was figuring out the pattern and order of assembly, now it’s all smooth sailing! 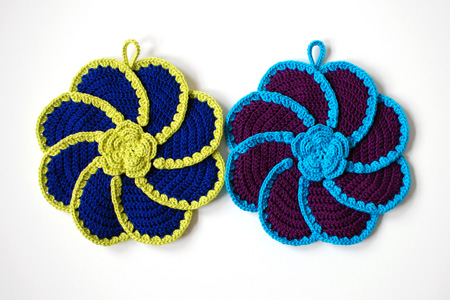