I have a theory: any time it gets a little nasty outside, I finish another snugly project! It’s now been the case three times in a row! 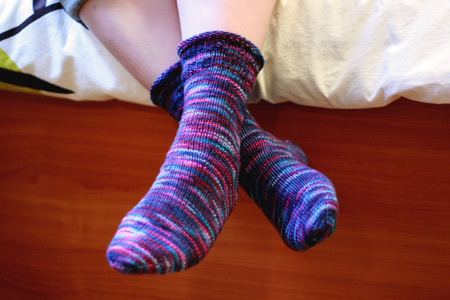 I really (really) like this yarn. When I examined the yarn beyond the color (because that’s a very individualized preference), I found a fiber that was soft, resilient, sturdy, and well-balanced. An immense pleasure to knit; two enthusiastic thumbs up! 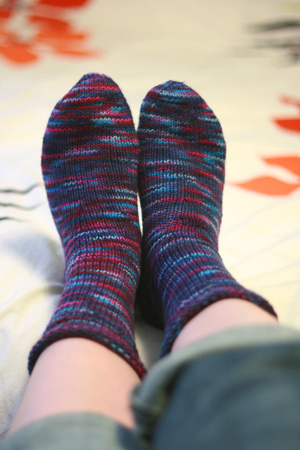 I saw a discussion on Ravelry the other day: hand-dyed yarn, same dye lot, but noticeable differences between the two skeins – what gives?

Yup, it happens! Look at the photo above: the sock on the left is the pink cousin, and the one on the right is the blue cousin! There are so many more examples… the two skeins used in making the two brioche stitch neck warmers were the same dye lot, but looked different when knit up, and here’s a pair of Lorna’s Laces socks where one striped more than the other. And check out Domesticat’s Malabrigo sweater!

If this is a concern for you, I think there are two potential solutions: first, when purchasing the yarn examine the skeins carefully. When I bought the Marisol Hacho, I picked the two skeins that looked the most alike. There were others which had less of the light blue, or more of the bright pink… I passed them over. Second, if the two skeins are going to be used one after the other (in a sweater, for instance), and you want to avoid huge block of color, you must alternate the skeins! 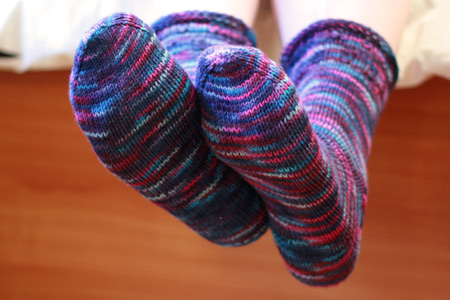 Anyway, for my grandma’s socks this wasn’t a huge concern, so one is a little more blue, and the other, a little more pink. And now that the socks are done, I think the bright colors appear more subdued than when they were in the skein, so maybe my grandma will like them after all?!? 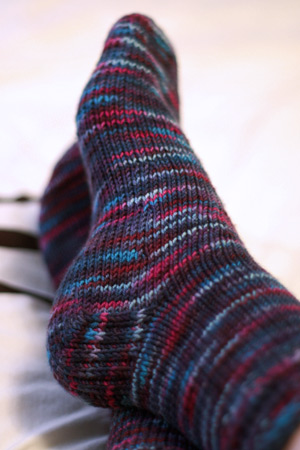 Here you see the Foxglove trickery: those increases along the instep create roomy space for the ankles. Surprisingly, knitting the second sock wasn’t too much easier than knitting the first. I sailed through the toe and arch expansion, but had to follow the heel instructions with as much diligence as the first time around.

I don’t know… the language just isn’t sticking with me. If you have the book, glance at page 121, “Step 1.” I must have read those paragraphs sixteen gazillion times, and the instructions still makes zero sense to me. I understand that what I’m asked to do is to separate out the sole stitches, and make sure I’m poised in the beginning of those stitches, ready to work them. But… seriously… isn’t there an easier way to say that than what you see in the book?