As before, my apologies for website downtime last night – I exceeded my bandwidth once again. With the upgrade earlier this month, I hope this is the last time.

Well, I did it. My latest indiscretion is bound to get me kicked out of the Knitter’s Club. 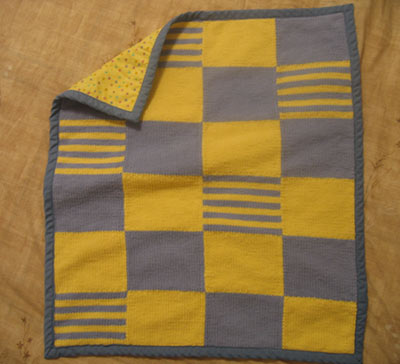 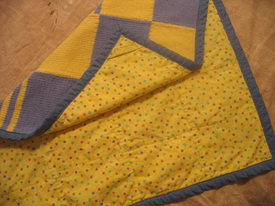 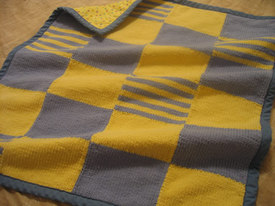 This is the secret sewing project I’ve been mentioning here (“here” being my knitting blog) for a while now, and it is finally done.

Recipient: Jennifer’s baby! Jen reads my blog, and I wanted the gift to be a surprise, so the project was a secret until now. The wee one is set to arrive any moment now, and we do not yet know whether it’s a boy or a girl.

Pattern: it started out as the Baby Giraffe Blanket from Vogue Knitting on the Go – Baby Blankets

, but quickly turned around and became its own entity (more about that in the extended entry). The blanket is thick and cushy, and not very large, so I think it’s more suitable for playing, sitting, and laying down, than for wrapping up the baby.

On the knitting end: Hand Work Cora, about 3 skeins of each yellow and blue, US 6 needles.

On the sewing end: Wilmington Prints Color Visions cotton for the backing and white flannel for the lining, about 3/4 of a yard of each, 2 packages of bias quilt binding.

Click on the extended entry link to catch up on months’ worth of progress. I promise to butcher all sewing terms, make up new ones, and curse yarns with improperly-set twist – it will be a good time ;).

Isn’t it adorable? The pattern had me captivated from the first moment I saw it. It was only a matter of time before the first victim got knocked up and I could knit this cute thing for her and her baby. When Jennifer and her husband decided to not find out the sex of their baby during the pregnancy, I thought that this would be the perfect gift because it’s very gender-neutral.

But sometimes cuteness is only paper deep. When I knit up the first of the giraffe blocks, I had very mixed feelings – to me, it looked nothing like a giraffe! Not to mention it took forever to work all that intarsia and weave in all those ends. I consulted several bloggers for advice, and surprisingly they didn’t have much to say about the resemblance of the giraffe to a stupid alpaca, but fixated on the back of the block, which was very unsightly. “Huh,” I thought, “they’re right! Whether I keep or nix the giraffes, I better line this blanket!”

Needless to say, the giraffes were nixed – I just couldn’t be bothered with all that work considering the results were not pretty (if the giraffes came out cute, I would have slaved away, don’t doubt it for a second!). From that point on, the blanket became known as the “no-longer-giraffe” blanket among my circle of knitblogging friends.

Believe it or not, the pattern specifies knitting that entire blanket in ONE piece. That’s even worse than making it from individual squares! Can you imagine the intarsia hell?!? I decided to knit the blanket in four vertical strips. As a result, my seaming and intarsia-induced madness were minimal, and I invested the saved time and energy in lining up those strips perfectly, each little V opposite its neighbor, especially at the meeting point of four squares.

I put the seamed blankie, as well as some backing fabric I purchased at Fabric Place through the washing machine and the dryer to let everything shrink, stretch, take its shape, whatever.

That’s where the troubles began.

I ended up with perfectly nice cotton fabric for the backing, but the handknit fabric acquired a non-rectangular parallelogram shape (for the non-geometrically inclined, think of a playing card diamond!). After speaking with a few knitters who are also spinners, I’ve learned that if one knits a square, but it comes out as a parallelogram (in my case, this feature revealed itself after washing), the spin of the yarn was not properly set. I was bummed, but not stopped. I immediately started to think of solutions.

As I saw it, there were two options: I could go with the flow – keep the parallelogram shape, and cut up the cotton backing in the same shape, attach the two, and that would be that. OR, I could force the parallelogram handknit to become a rectangle by attaching it to a rectangular-shaped backing.

I opted for the latter. At first I only planned to attach the two along the edges, but basting revealed it would not be enough to force the knit parallelogram to be a rectangle. Plus, there would be this big pocket of air in the middle. So, I decided to, basically, quilt the whole thing, attaching the two three pieces of fabric along the edges of all the squares (somewhere between here and there I stuck another piece of lining fabric between the knit and the backing for extra cushiness, and because I felt the backing was too transparent). Carrie talked me into doing the whole thing by hand. This would be more time-consuming, but supposedly it’s more invisible and accurate than if I were to use a sewing machine.

I made up a grid of how the squares would fit in an ideal situation, and used the red threads you see as guides, since the handknit squares were distorted into parallelograms.

The hand sewing took the longest… months. I think that’s because I’m a novice seamstress and needed to learn how to efficiently flip this entire blanket from one side to the other with every stitch. Eventually I got very good at sewing with both hands – on one side I would push the needle with my left, and on the other, with my right. I’m thinking this is the sewing equivalent of knitting backwards ;).

Attaching the blanket binding was not difficult at all; I think that’s because I used the sewing machine – it only took me a few hours. I even joined two pieces of bias binding all on my own! The right way! (if it’s okay, we will not discuss how many times I joined the two the wrong way before getting it correct). Binding cut on the bias was interesting to work with, and I think given the choice, I wouldn’t use it again because I didn’t need any stretch in the horizontal direction, and it just puckered under the presser foot unnecessarily. But Fabric Place didn’t have other options, and I certainly wasn’t about to make my own :).

The special touch – a custom label ;). Here I used some scrap backing material, sewed it into a tube, turned it right side out with a pencil, then attached a little label just like in the tutorial. I sewed the whole thing into the binding, and I think the mom may use that to hang the blankie on a hook if she wants.

Last, I closed up the mitered corners and the binding seam by hand, and machine-washed and dried the whole assembled thing while praying to the sewing gods – will all my work be enough to allow the rectangular blanket to keep its shape? Or will it go back to its parallelogram ways as soon as the washing was done?

I examined the dried blankie, whispered “thank you!”, popped open a diet Pepsi, and sat there on the couch, perfectly satisfied :). The improperly-set twist was an unwelcome surprise, and the hand stitching to combat it took some time, BUT I love the final product. It is a rectangle. It’s a soft and sturdy surface to put the little one. I. LOVE. IT.

Next time? I would line a blanket in a heartbeat as long as I could do the whole thing using the sewing machine.

Can I make one last plea to remain in The Club? Please? Look, here’s a picture of my sewing machine. I am not kidding when I say I have no idea what this sewing thing is about. Look! The knobs of my machine are marked to tell me which sets the stitch length, and which the stitch width! I’m clueless!