As soon I stepped outside to take some outdoor photos of Sharfik, tripod in hand, I stepped into a pile of dogshit. What is up with that, people?!? I am starting to have such a low opinion of dog owners in my area. Hrummphh!

Indoor photos it is!

So cute! But manly, of course. Seriously, the only thing that’s stopping me from “adopting” dad’s Sharfik is the color – brown is NOT for me.

An idea of length: 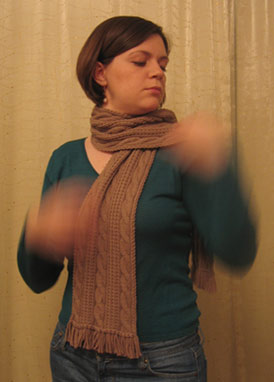 Pattern: a very simple combination of loosely-crossed cables and broken rib. I wrote it down, though, just for you – now go and make one of your own!

Needles: US 7 Boye (Addis didn’t work for me on this project at all).

Yarn: Karabella Aurora 8 in #1362 “kangaroo”; 4 skeins for the actual scarf, and a bit of the 5th for the fringe. I bought the yarn from Yarn Country, and I would recommend them – quick responses and very quick delivery.

Finished size: 53″ long, plus 2″ of fringe on each side (two strands every other stitch), and 6.5″ wide (my dad ended up changing his mind about the width).

I’ll be mailing Sharfik to my dad shortly, and I’ll let you know if he likes it! I hope so… but then again, I would love to design and knit him another if he doesn’t like this one :).

For the extremely curious, click on the extended entry link to read my thoughts on the yarn and why cutting my own bangs would have been a terrible idea!

I have really mixed feelings about the yarn for this project, Karabella Aurora 8. I loved knitting with it. It is so springy, so soft, so uniform. There wasn’t a knot or a splice in a single skein, and knitting with it was a treat.

But I fell out of love after blocking. First, the yarn grew, as I told you earlier. Not just by a little bit, but by a whole 20%, from 53″ to 64″. I could have easily accounted for that by first knitting and washing a swatch, but isn’t the whole beauty of scarves that you don’t have to do that? Also, I didn’t block severely at all – I just washed the scarf in a little detergent to get rid of any grime, then laid it out on a towel to dry (no pinning).

To make the story more interesting, when I woke up the next morning, I found Sharfik had shrunk to 60″! What is up with that?!? Really, I don’t have time for this kind of nonsense. I would have been super pissed if this was a sweater, even if I had knit a swatch and everything.

I also felt that blocking completely deflated the yarn. It was so bouncy, so full before, and now it is limp, deflated, even without putting the scarf under any sort of tension while blocking! A little while ago I saw a woman wearing a Backyard Leaves Scarf knit out of Karabella 8, and it looked completely worn and depouffed. I thought maybe she had had the scarf for a long while… but now I think the yarn takes on this look as soon as it’s wet. I hope that perhaps with a little wear it may become bouncy again; I’ll have to ask my dad in a month or two.

So, the verdict is that this yarn is great to satisfy tactile cravings, but I have serious reservations about its usability for a garment, especially a sweater. How would one write a pattern for the ever-changing gauge?!?

Now, onto my bangs 🙂

I had bangs for about 10 years, from the time I was 12 until I was 22, and I never ever, not even once, cut them myself. Those of you with bangs will say that I’m truly insane! But I have proof why this would have been such a bad idea: 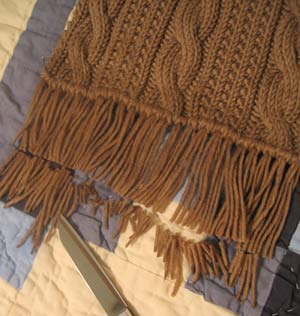 There are two things wrong with this picture. First, the fringe is attached on the wrong side (d’oh!), and second, it is completely crooked. I aimed and aimed, and it still came out completely stupid-looking. And you know my parents have serious concerns about stupid-looking stuff :).

I was smarter the second time around: I attached the fringe on the right side (incredible!), taped down the ends to indicate where I wanted to cut, and used little scissors for precision. That worked well. 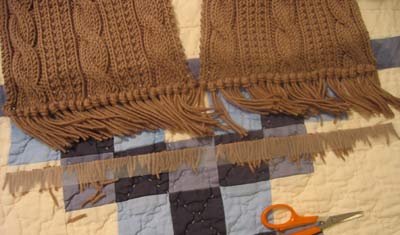 Maybe you can see that the tips of the scarf are wet. Just like hair is wetted before it’s cut to get every strand to line up, I decide to wet the fringe ends before cutting them. I think this assured that the whole thing came out even.

Nonetheless, I obviously wasn’t meant to be a hair stylist ;).