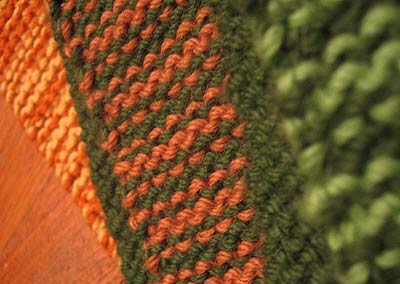 Well, relatively speaking – I’m done with the knitting, which is all I had to do. Annie will do the felting, stuffing, and assembly. I think the stuffing will be really fun! Have you seen the pockets which are cleverly formed during the knitting without any extra seaming or assembly?!?

Although the all-dark-green pockets may not look like they were as much fun to make as the striped ones, they still totally were!

I don’t have a lot of specs to report, other than the yarns used in this project, KnitPicks Wool of the Andes and Sierra were very nice to work with, and great at soothing my cotton-chapped hands. I, too, look forward to real FO pics when the book is published! 🙂

I was thinking, this project and Meg’s Forbes Forest have been the two most fun projects I’ve knit. The thing common to both of them is the captivating details that keep things interesting row after row, repeat after repeat. When knitting the scarf, even towards the end I was still intrigued and fascinated by the winding cables and the technique used to make them, and when knitting the dog bed, the double-knitting as well as the stripes inside the pockets kept me from putting the needles down.

Of course Annie is responsible for teaching me both techniques. What can I say, I’m infatuated with doing things the clever way.

Based on all your wonderful comments to my last entry, I do want to tell you a bit more about Combined knitting. However, because I have a certain verbal diarrhea on the subject, and it’s a bit of a rant, I put my thoughts into the extended entry. Click the link to keep reading!

When it comes to Combined knitting, I’m entirely biased, of course. The truth is that if I hadn’t discovered Annie’s Combined knitting webpage during my formative knitting months, I would NOT be knitting today. So, of course I think it’s the bomb diggity (which the urban dictionary defines as, totally the awesomest, just the shit, and awesomeness in its purest form).

To read more about Combined/Combination knitting, you can visit Annie’s site or mine. I also have videos on my video webpage in case you want to see what Combined knitting looks like with regular knits and purls, outside the context of double-knitting.

So, to answer some of your questions, the benefits of using Combined knitting are many.

In my opinion, the most important benefit is a deep understanding of how knitting works, how stitches are formed, how they come together to make a knitted fabric. More practically, Combined knitting is intuitive. How many of us self-taught knitters started out by wrapping our purls in the Combined way? SO many. It just makes more sense! The movements are very efficient, the maneuvers are quick, effortless. I timed myself this weekend – when knitting stockinette stitch, I’m 20% faster using the Combined method. Think of it as finishing a project in 4 days instead of 5! More efficient maneuvers also mean less wrist strain, of course. Many say that it helps them with rowing out, and it helped me in the beginning, too, although lots of practice and belief in the miracle of blocking are essential in the long run.

That being said, I DON’T use Combined knitting exclusively. Sometimes when swatching, I decide that I’d like to knit a particular project in the typical Western method. I don’t know what criteria I use to make my decision, but it seems to me that the bulkier the yarn, and the more tight I want the final fabric to be, the more likely I am to use Combined knitting. Combined knitting also doesn’t apply to projects where every stitch is knit – stockinette in the round, or garter stitch knit flat. “Critics” of Combined knitting will often cite this as a con. My response: a Combined knitter doesn’t think of these situations as a con; in fact, we don’t think much about it, we just knit the stitches as they present themselves.

Another con the critics cite is that Combined knitters need to translate all patterns to their own language. Pardon me for stating the obvious, but this con has nothing to do with Combined knitting. The real problem is that patterns are written for only one type of knitting, while there are so many ways to achieve the same final result. Besides, we get quite good at translating the instructions without much thinking because of the most important benefit listed above – a deep understanding of how knitting works, how stitches are formed. And if we’re too tired to think, I have a conversion table on my website :). The other side of this coin is that knitters who like to follow instructions to the very last detail, without any deviation, may find that although Combined knitting has many benefits, it’s not for them.

The last thing I want to say is that Annie, and her book, Confessions of a Knitting Heretic

are not only good for Combined knitting. Annie has this attitude of encouraging knitters to make the knitted fabric however they want, and it makes all the difference when struggling with how your own personal way of knitting fits into (or doesn’t) the glossy pictures in the big How To books. Reading her words and her thoughts convinced me to pick up my knitting needles again, even though I was quite ready to give them up for good (hence my bias). Confessions also taught me to cable without a cable needle, to make turning-less, voluptuous bobbles, to make invisible increases, and so much more! All these things, as well as Combined knitting, are certainly worth a try – until you do so, you’ll never know if it’s for you!