… One of these things just doesn’t belong,

Can you tell which thing is not like the others

By the time I finish my song?

By the way, I did not grow up with Sesame Street (I think the communist regime had something to do with that), but that little tune must be in a Pampers commercial or something, because I know exactly how it goes!

Just as I finished up my Sockapal-2-za Sock Pal socks, I joined another knitting exchange: Stitch Ya Neck Out (SYNO).

This one is the total opposite of Secret Pal exchanges – in SYNO, you get exactly what you ask for! And so, my immediate attention ;). In this exchange, you select a scarf pattern and purchase appropriate yarn, mail it off to another knitter, and a few months later, voila, a finished scarf arrives, exactly as you specified and expected. In the meantime, you knit a scarf for someone else, exactly according to her specifications and with her yarn. What a concept!

From what I’ve read so far, most participants are requesting Ruffles or Turtleneck Shrug from Scarf Style. Not me! I selected a pattern that’s not even on the approved list of patterns! You knew I would have it no other way, right? My SYNO pal will knit for me this little cutie:

It’s the Lace Leaf Scarf from the spring/summer 2005 VK. As far as Google can tell, only one of these has been completed and blogged about to date. Oh yes, perfect for me!

The pattern is a simple 16-row repeat, so I felt it wasn’t any more complicated than the other scarf patterns at SYNO. If you see an immediate resemblance to my Backyard Leaves scarf, you aren’t mistaken. But I like these kinds of motifs, so why not have another?

The yarn called for in the pattern is Filatura Di Crosa Luxury, which is 100% silk, and $18.50/skein (3 required for scarf). I am not that rich, so I decided that Debbie Bliss Baby Cashmerino would be a reasonable substitute. The gauge is very similar… or, similar enough for a scarf 🙂 (Luxury 26 sts/30 rows, DB Baby Cash 25 sts/34 rows). 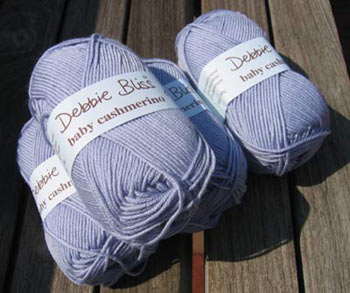 Today I stopped by one of my LYSs and picked up this beautiful periwinkle DB Cashmerino. Since it was on sale, my scarf will cost less than half of what it would cost knit out of Luxury! Quite importantly, I think my SYNO pal will like working with this yarn – it is very soft. 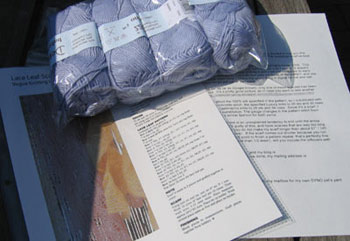 And here is the stuff I sent off to my pal (not even 1/2 hour after I purchased the yarn this morning): a few copies of the pattern (we have to provide the pattern unless it’s in Scarf Style or free on the web), the yarn, and a small detailed letter. I’m picky and can’t shut up, hehe :).

Who will be knitting my SYNO scarf? Now that would be ruining the surprise, wouldn’t it? You’ll find out soon enough when she received the yarn and starts knitting. Anyway, what’s even more interesting to me is who will I knit for, and what scarf will it be?