It’s about time to wrap up by grandmother’s Best Foot Forward Socks. This project must’ve been mediated by the powers above from the very beginning. The yarn was joyous, the casting on was new and different, the twisted stitches, deceivingly complicated. There was one fumble in the middle, and perhaps a bit of bleeding, but the injuries were temporary and easily healed with a little cursing and a diet Coke. 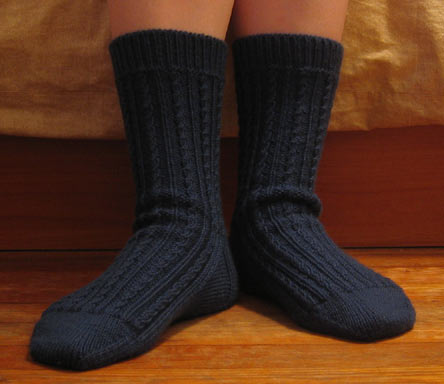 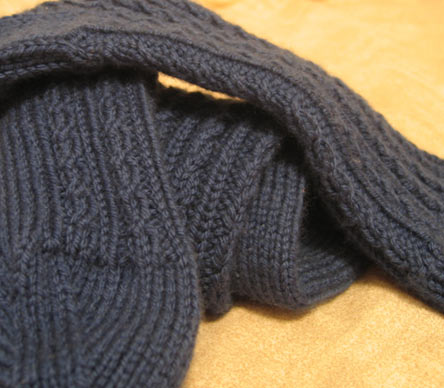 Yarn: KFI Cashmereno, 55% merino wool, 33% microfiber, 12% cashmere, color 06, 3 skeins. The yarn is quite nice, although it did bleed heavily when I washed it, and there were at least 2 knots in every skein. I recommend that you rewind your skeins if you use this yarn to catch the knots in advance.

Needles: INOX aluminum dpns, 2.5 mm (corresponds to US 1.5, although they were marked US 2 on the package).

Details: Just one major one to point out. Because I want these super-soft socks to last grandma a decent amount of time, I reinforced the sole of the foot. Knitting with the reinforcement held together with the yarn didn’t quite work out because it produced a super-stiff fabric. Instead, I wove in the reinforcement after the socks were completed in a manner one weaves in ends.

I must’ve taken 40 pictures trying to capture this, but the yarn is dark blue, and so is the reinforcement. I had to illuminate it with my Ott-Lite and all other kinds of nonsense. Dark blue is just a bitch to photograph, I think, and this is the best I can do. 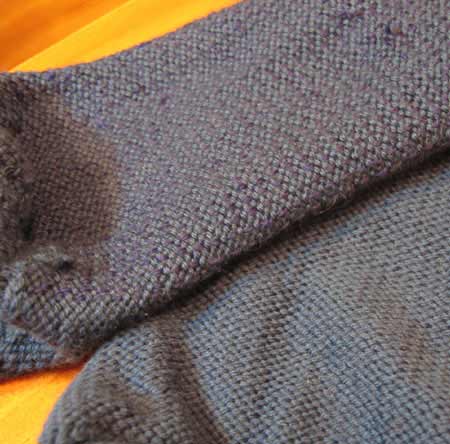 The sock furthest from you has the reinforcement thread woven in, while the one closest to you doesn’t. Can you see?

Off to grandma’s they go!