I DID a heel flap! I made the flap and heel turn of one color, then just picked up stitches with whichever color was in the right position. It was a little nerve wrecking, but it went OK. I’m cruising down the gussets now… –Diana

Girl, you’ve got it! Knitting your spiral socks with a flap heel is rather intuitive, and certainly not more complicated than inserting a short row heel. In fact, you’ll notice some copy ‘n paste action in this post, because the two heels are fundamentally inserted in the same exact way. Let’s take a look, step by step. 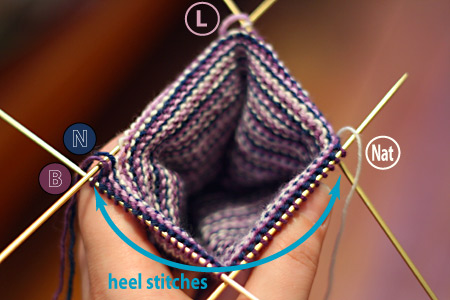 Here you see the heel yarn (B for Blackberry) hanging on the left side of the heel stitches. Of the two yarns at that junction, it is the topmost. At the point the photo was taken, I was about to turn my work and purl back, thus starting the heel flap.

Note 1: All the heel stitches are currently blackberry. Depending on the instructions you follow, you can count this as the first row of the heel. Of course, no other yarns are in the way, so I can proceed full steam ahead!

Note 2: As some of you pointed out, this kind of arrangement may necessitate “working out of order” – knitting an extra dpn-length with the heel yarn, for instance, when you typically would have moved on to the next color. Just remember that this “order” is purely arbitrary: as long as you’re always using the lowest available strand, you’ll be able to recreate the setup with which you’re most comfortable in no time at all!

Note 3: Along the same lines, the photograph above captures only one of several entirely equivalent yarn distributions. Would it matter if I knit the Navy to where the Lilac is currently residing? Not in the least bit! As long as (1) no yarns interrupt the heel stitches and (2) you’re always using the lowest available strand, you have it right! 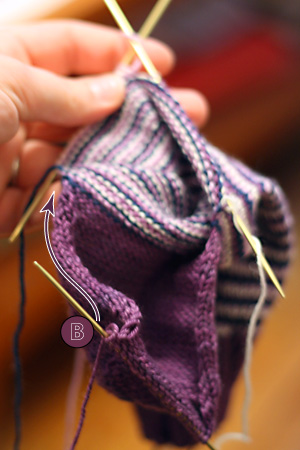 I have knit the heel flap, and heel turn. The Blackberry strand is poised perfectly for picking up stitches along the left gusset, so that’s what I’ll do! 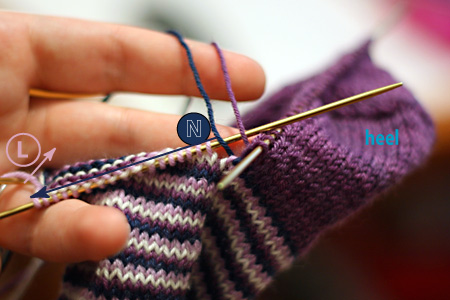 At the bottom of the gusset I encounter a Navy strand, and it is the lower of the two – oh, noes! Hehe! I have no choice but to drop Blackberry and pick up Navy as I work my way across the next dpn. And then I do the same with Lilac when I reach the next junction.

And so, I’ve now reached the right gusset! Natural is the lower of the two strands, so I will use it to pick up the right gusset stitches and knit across half of the heel turn. 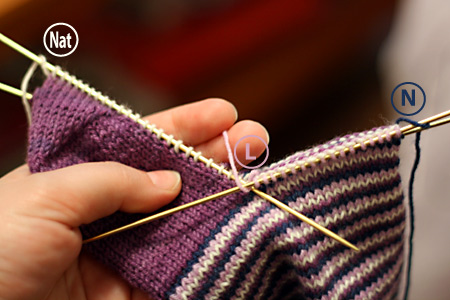 At the end of this maneuver, here’s what I’ve got: 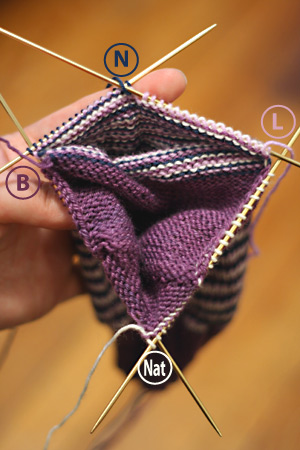 Friends, are you seeing what I’m seeing?!? Look at it! There’s a strand of yarn hanging off each dpn junction! We know what to do with this, right? This is home base, where this whole thing began!

Now we knit round and round, incorporating decreases at the gussets as usual, until we reach the toe. Until then, little socklet, keep on spiraling!