Are you ready for the extreme geekness that’s about to come down upon you? Grip yourself, sit down, and maybe get your eyes ready to roll.

When I washed the body of the Adrienne Vittadini sweater, the yarn bled like a mofo. It was not pretty. Bloggers chimed in and suggested a variety of remedies: Synthrapol, vinegar, even microwaving! It was time to put these suggestions to the test.

Background and significance: I knew the KFI Cashmereno used for knitting my grandma’s Best Foot Forward socks would bleed. How did I know that? It turned my fingers blue after knitting for long periods of time. I was pretty resolved to figure out how to stop yarn from bleeding, so it was time to do some experiments. 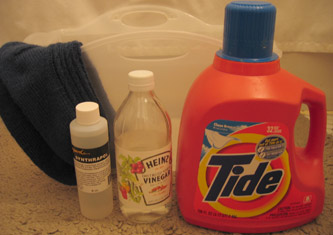 Hypothesis 1: Synthrapol traps excess dye particles and deposits them inside the yarn.

Methods: I filled the basin with lukewarm water, and added a capful of Synthrapol as well as some Tide. I placed the socks into the mixture. 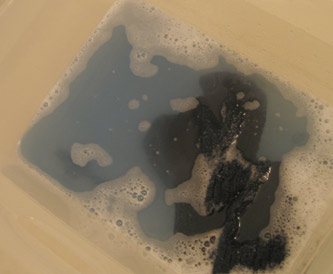 The socks bled like mofos. Synthrapol does not attach excess dye particles to the fabric.

Hypothesis 2: Synthrapol helps excess dye leave the fabric. Since the socks have already been treated with Synthrapol once and lost a lot of dye in the process, perhaps Synthrapol released all the excess dye into the water already, and no more bleeding would occur. If this is the case, then placing the socks into fresh water will no longer turn the water blue.

Methods: Place socks into a fresh batch of lukewarm water and Synthrapol.

Results: The socks bled like mofos (data not shown). Synthrapol does not eliminate all the excess dye after one wash, since the socks continue to bleed.

Experiment 2: vinegar. It looked like the socks had a lot more blue dye to lose after two Synthrapol washes, so I had enough material for a second experiment.

Hypothesis: Vinegar traps excess dye particles and deposits them inside the yarn.

Methods: I filled the basin with lukewarm water, added a bit of vinegar, then added the socks. 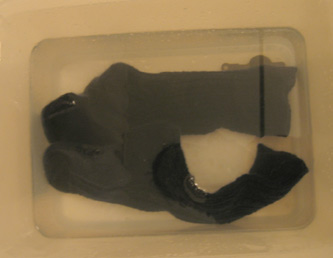 Considering how much excess blue dye I expected after the second Synthrapol wash, I think the vinegar actually helped to trap the dye and deposit it inside the yarn! The water was just barely blue.

Follow-up experiment: Since I didn’t want grandmother’s sock to smell like vinegar, nor did I want them to spontaneously start releasing excess blue dye every time the pair wasn’t washed in vinegar, I insisted on following the vinegar wash with a traditional water & detergent wash.

Methods: I filled the basin with a fresh batch of lukewarm water, added a drop of Tide, then submerged the socks. 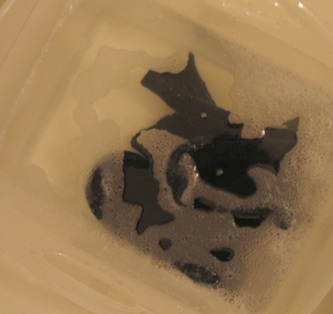 The hypothesis was correct! Following the vinegar wash with a traditional detergent & water wash didn’t counteract or reverse the setting/trapping effects of the vinegar. The water was almost unnoticeably blue.

Conclusions: I am not sure what the Synthrapol does. It neither allowed all the dye to leave the fabric at once, since the yarn bled after the 1st wash, nor did it permanently set the excess dye particles inside the fabric. Foo on you, Synthrapol! Vinegar, a cheap and common consumable, seems to attach the excess dye particles to the knit fabric, since it stops dye bleeding when it’s expected. This effect is permanent: a common soap and water washing does not reverse it. In the future it would be useful to test the vinegar on bleeding fabric that hadn’t been washed twice in Synthrapol.