And now the bleeder has also ruined the towel on which it was drying: 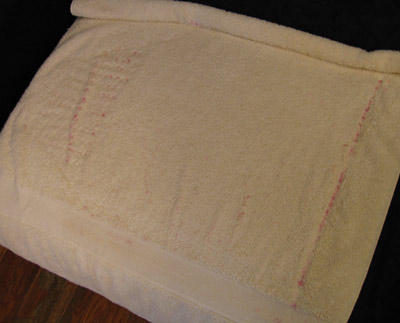 To answer Colleen’s question, it will not bleed this much every time. I rinsed and rinsed, and by the time my arms got really tired, and my back started to hurt from hovering over the bathtub and it was about 2 a.m., the water was a light peach color. The spots of very saturated color on the towel is a physical phenomenon – the water drains into the towel non-uniformly, in specific spots. The dye doesn’t go through the towel, it is trapped on the surface, which is why there are a few pronounced, dark spots rather than an outline of the culprit in a light peach color.

I thought there might be more speculation about the bleeder, but I’m guessing (correct me if I’m wrong) none of you could have predicted that this is the culprit: 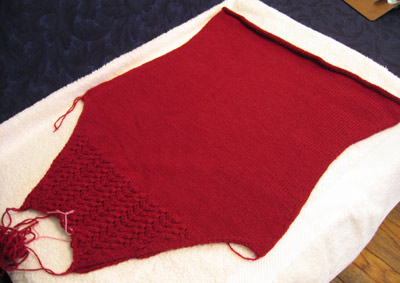 I put the move on, guys and gals!

So far, so good. The lace and cable patterning is physically demanding. It’s a simple, easy to memorize repeat, but it’s a nice workout for the hands. In retrospect, when I was frustrated with knitting the stockinette stitch body of the sweater, I should have just started a sleeve!

I didn’t change the dimensions of the sweater that much: just shortened the body 1″, made the chest circumference just 1″ wider than the smallest size, and knit the smallest size otherwise. (By the way, the smallest AV size for this pattern and many others is 35″! That’s a size large for many British designers! Oh yes, if you have a knitting blog, you’ll have to reveal your dimensions eventually, it’s true).

However, I’m substituting the yarn (written for Adrienne Vittadini Martina, 19 sts/24 rows, I’m using KnitPicks’ Merino Style in Hollyberry, 23 sts/33 rows) and have had to do major Maths to accommodate both the change in the stitch gauge and in the row gauge: 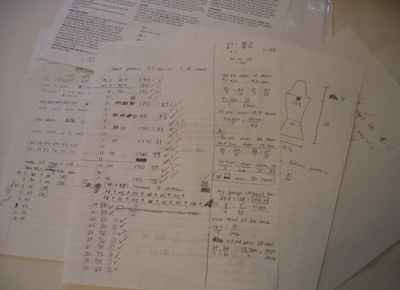 Some other little details: